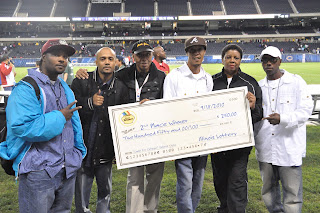 Music Quest Communications Announces
Chicago’s Hottest Local Talent Concert Winners
from the Chicago Football Classic 2010
For further information on any of the artists please contact Music Quest Entertainment, Gus Redmond at 312-363-7980 or by email at grmusicquest@msn.com.

Success Is In The Best Selling New Books - CLICK BELOW

Our national team has over thirty years experience in music and entertainment, corporate public relations, marketing, promotions, and sales. As experts in the field of public relations, we'll share our success strategies and stories to help to succeed in your business.

We have work with major record companies and paved the way for stardom for many of today's biggest Superstars. If you are serious about building your company or getting exposure and want to succeed call us today.

Throughout the years we've assisted thousands of people to "turn their dreams into reality." We've helped entrepreneurs, CEOs, entertainers, recording artists, painters, creative and talented individuals, and many others who wanted to reach higher goals.

We hope you'll enjoy our blog and keep coming back. There will be valuable information posted and updated every day.

Public Relations Power
Orlando, Florida, United States
Your initial PR telephone consultation is FREE! Public Relations is a POWERFUL branding tool if you know how to use it. Join, Public Relations Power’s Blog and learn how you too can get your “BRAND” noticed in the global marketplace. Our team of experts have been in the branding business over 10-years and has worked with hundreds of Super Stars such as: Janet Jackson, Whitney Houston, Hall & Oates, Dunn Pearson Jr, Melba Moore, Yanni, Diana Ross, Police, David Bowie, Eurythmics, and the list goes on. We worked to make them the “hottest BRANDS" in the entertainment industry. We have also helped thousands of entrepreneurs build strong businesses, and we can assist your company to develop its winning PR strategies. Do not wait! Call us today to assist you in building an award winning public relations, advertising, marketing, or promotional campaign.